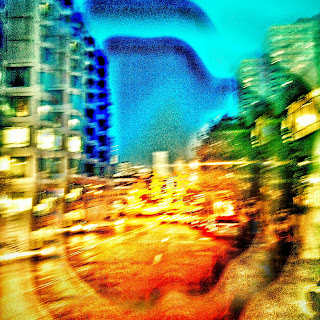 It was a morning like any other in San Francisco; the sun rising,  the crisp cool air warming up under the sun's rays,  and of course, the bumper to bumper traffic of the commuters into the city for the daily grind.

I like to leave a little space in front of me in case I need time to stop,  and one driver behind me didn't particularly like this very much.  As he would have it no other way,  he grunted repeatedly with his car's engine,  spoke rather flamboyantly to me through the horn, gave me the glorified finger, and made a quick "zoom" past me until,  well... he had to stop 20 feet later because, that was as far as he could go in bumper to bumper traffic.

I, amused at his hearty effort, gradually pulled up beside him feeling sorry that his rage had failed so miserably. When we were side by side and stopped, I rolled my window down and waved "hello!" as seemed fully appropriate with my new friend.

He too rolled down his window and a friendly conversation ensued until we we were off,  inching our way down the interstate yet again.

This is just a reminder to you all to drive safe! Here are some pointers I've included in order to do exactly that:

1. Maintain a safe distance from the car in front of you -  this will give you time to stop should you need it

2. People are the enemy - do your best to avoid them and their vehicles at all costs

4. Change lanes slowly so people can honk if they were hiding in your blind spot

5. Always be on the lookout for dangers -  driving is like Halo on steroids

6. Try to look into the future -  by that I mean look far ahead of you on the road rather than just staring at the car in front of you

7. Be considerate to other drivers

8. The left lane is the passing lane; if you are not passing and are not turning left,  consider moving into the right lane so other people can pass you -  like my friend

9. Look out for people behind you; it's not just what's in front of you that you should be concerned about. There are far too many texters out there to not look in the rear view mirror when coming to a stop - an accident is an accident regardless of who is to blame, and I personally do not wish to be in one

10. Follow road signs and if in an unfamiliar area,  it is best to use GPS to eliminate confusion

I am 26 and have been driving since I was 15; never once have I been involved in an accident and you could say that I've done a fair amount of driving considering my current Living with Lyft venture.

Though I'm not knocking on wood either. If I get into an accident,  I consider it to be my own fault even if it was the fault of someone else because I could've done a better job at avoiding it.

We only have a short amount of time before driverless cars will be taking us to our destinations, so make the most out of it and be careful out there!